The first annual PA Firefly Festival events will take place on the grounds of Black Caddis Ranch (BCR) B&B, and the Cabins at Camp Fossil Creek.  The following is a tentative timeline of events: 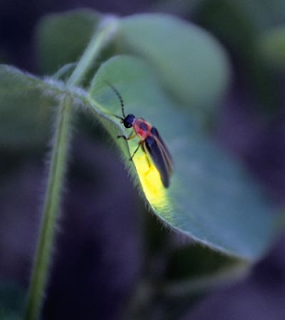 The BCR B&B and Cabins at Camp Fossil Creek are available and currently taking reservations. There will be limited tent camping (20 sites) at BCR for $10.00 per night.  The sites are primitive; no electric or water.  Reservations are required for any overnight accommodations.  Contact us at 814-463-7606 or butler.peggy.s@gmail for more information and to make a reservation.

There are several other places in the Kellettville area for camping, including the Flying W Ranch, Kellettville Campground, Minister Creek Campground and primitive sites along the North Country Trail.

Announcing the First Annual PA Firefly Festival, June 21-23, 2013.
Annually, in the warm evenings of June in the fields and forests of Pennsylvania, a natural phenomenon takes place that many of us have begun to take for granted.  However, almost 2 years ago, one very observant lady noticed this phenomenon while camping along side the banks of the Branch Creek on the North Country Trail.  Cathy Pedler was that camper, and she wondered if what she was seeing was significant, or just another everyday occurrence. As it turns out, her observation is very significant.

What Cathy observed that night were fireflies blinking in unison.  She went home to search and discovered that some rare species of fireflies are considered synchronous.  Cathy found the leading authority on the synchronous fireflies, Lynn Faust, in Tennessee. Supported by a grant from the Secure Rural Schools in Forest County, Lynn brought her team of scientists from the Universities of Tennessee and Georgia last June to study the fireflies in Forest County.  There are synchronous fireflies in the Smokey Mountains, but never were observed or confirmed to exist outside that area.  So, Lynn and her team came here to study "our" fireflies.

The scientists worked every night for 10 days, observing, collecting and identifying over 17 different species of fireflies in this area including one dubbed the Chinese Lantern.  They were able to confirm, through DNA testing, that indeed some of the fireflies we have in Forest County are the synchronous variety known as Photinus Carolinus.  This is exciting news.

While many of us as children took delight in catching lightning bugs or fireflies in a jar on the summer evenings to light our tents, there seems to more to the firefly than just a twinkling butt.  The humble and harmless firefly is what is known as an indicator species, and is usually a sign of a healthy, well balanced habitat.  We knew we had fireflies in this area, but never knew it was of any significance.  As it turns out, since 1974, the firefly has been designated the official insect of the Commonwealth of Pennsylvania.  We want to insure that this insect gets its due respect, and continues to bring delight to future generations of children of all ages.

The First Annual PA Firefly Festival this coming June will focus on education and observation of the 17 species of fireflies including the synchronous firefly light show and the Chinese Lanterns  on the Tionesta Creek.  There will be plenty of campsites for those who want to stay for the entire weekend, or just bring your lawn chairs and picnic baskets for a Friday or Saturday evening of fun and amazement.  On Saturday afternoon, there will be events for the kids and music.  The planning committee is meeting monthly from now until June, and we will keep you posted about more details and information as it develops.  So, check back here frequently for more updates.
Posted by Ken & Peggy Butler at 5:53 PM No comments: 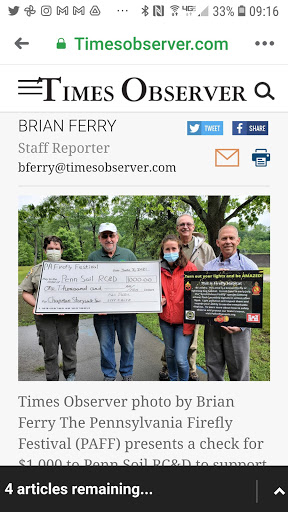 Because of the generosity of our supporters and the funds raised at firefly events, PAFF is now in a position to give back to those who share in the firefly mission. This year, we are pleased to be able to support the Chapman State Park's Story Walk project which will feature water conservation, Bucknell University's Firefly research on immune responses in Photinus pyralis, and the Xerces Society for their invertebrate conservation efforts with the International Union of Conservation of Nature (IUCN) especially for Lampyridae (fireflies). We hope to continue to grant like-minded organizations and worthy research projects. Contact us at pafireflyfestival@gmail.com if you know of anyone who would be interested in the grants. 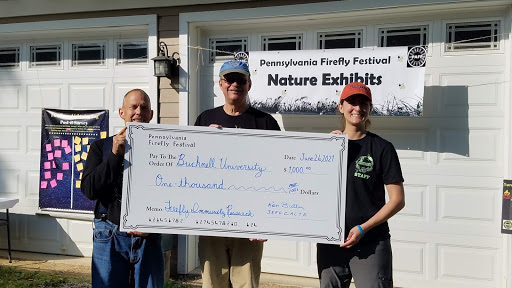 The Photinus carolinus, aka as the "Synchronous Firefly", was identified and confirmed to be in the Allegheny National Forest during the summer of 2012. A team of world-class Firefly scientists from Tennessee and Georgia came to Black Caddis Ranch for 10 days, and traveled throughout the ANF collecting specimens and studying the diversity of fireflies.
The P. carolinus is unique in that the males' flash patterns are in synchrony with each other, so they appear to be like a string of Christmas lights hanging in the forest. Other witnesses have likened it to camera flashbulbs at a sporting event. One of the other confirmed habitats in North America is in the Great Smoky Mountains National Park in Tennessee where 1000s of visitors line up nightly for 10 nights to see this phenomenon. More populations are being confirmed each year stretching from Georgia to New York along the Appalachian Ridge. The Synchronous fireflies are in abundance throughout the Allegheny National Forest and can be seen in the ANF recreation areas starting mid-June through early July.
Over 15 different species were identified and described along with the Synchronous. One other local species was a Photuris species dubbed the"Chinese Lanterns" by the scientists. These were observed floating across the Tionesta creek casting their glow onto the water.
Starting around July 4 to the middle of August, the "Big Dipper", Photinus pyralis, begin their displays in the fields and yards all over NW PA. They can put on quite a natural fireworks show from dusk around 9 pm to 9:45 pm. Whichever species you witness during the approximately 4-6 week season, you can be sure to have a moment of awe and wonder at this display of nature.
The season is highly dependent on weather and temperatures. We watch several different factors (both scientific hard data and "soft signs"). Follow us on Facebook for updates as the season begins and progresses in 2022.